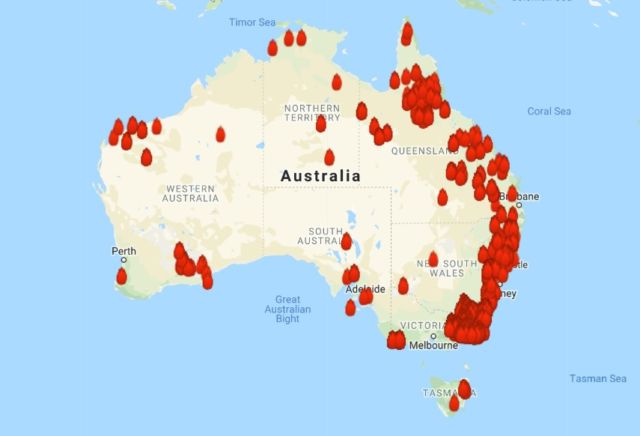 Iv’e never been to Australia, however I understand Australia is a beautiful country with picturesque coastline, beaches, and sunsets, not to mention the cuddly Koalas and Kangaroos! For those of you that don’t know, Australia has been burning for 2 months now since November 2019, originally starting with a small brush fire that has since  escalated to the burning of 15 million acres of land.

Aside from devastating fires, Australia is also feeling the effects of Climate Change, currently in a 3 year drought along with intense heat, dryness and wind, 2019 has been the hottest year on record for Australia, hence the term “Global Warming”. A couple weeks ago Australia set a new (average temperature record of 107*), breaking the previous record by 3*. There is a weather patter in the Indian Ocean, similar to the El Nino weather pattern we experience here in the U.S. suspected of causing the dryness in Australia. The Indian Ocean surrounding Australia, has been experiencing warmer water temp. pushing the rain away from Australia.

It doesn’t take a scientist to realize the effects of Climate Change are devastating and harmful to Humans, Wildlife and the overall existence of life on Earth as we know it! So far, thousands of people have been left “homeless” and nearly half a billion animals have been killed!

Unfortunately, scientist agree the Global weather pattern is here to stay, dry regions are only going to continue to get drier and places that get rain will continue to get more rain. Fortunately for Australia the monsoon season is coming, the current warm weather is looking to cool down in the near future and rain is also in the forecast! Perhaps Climate Change didn’t start the fire, however, it has kept the fire burning! Hopefully this is not a sign of, “Things to come” on Earth!