Stephen Hawking: We Must Find Another Planet 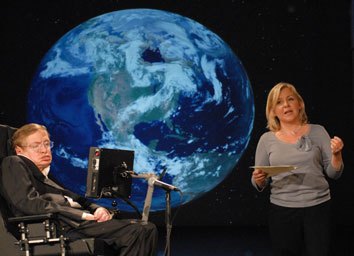 Theoretical physicist Stephen Hawking is one of the most intelligent individuals on the planet, which is why his assertion that humanity has only 1,000 years left on Earth and must find another place to colonize is incredibly frightening.

“[W]e must … continue to go into space for the future of humanity,” professor Hawking said in a lecture on “The Origins of the Universe” at Britain’s Oxford University Union earlier this week.

According to the Daily Express, the 74-year-old scientist warned that humans are using up Earth’s ecological resources faster than it can be replenished.

“I don’t think we will survive another 1,000 years without escaping beyond our fragile planet,” Hawking said.

Also in his talk, Hawking discussed creation myths, Einstein’s theory of relativity and how “the expansion of the universe was one of the most important discoveries of the 20th, or indeed any, century.”

He urged more space travel to advance our quest in understanding ourselves. “We must continue exploring space in order to improve our knowledge of humanity. We must go beyond our humble planet,” he said.

Hawking’s speech ended on an encouraging note. “Remember to look up at the stars, not at your feet. Try to make sense of the wonder that is around you,” he said. “No matter how difficult life may seem, there is always something you can do and be good at.”

This is not the first time that Hawking has made such dire warnings about the end times. At a January talk with BBC Reith Lectures, he said that nuclear war, climate change, genetically-engineered viruses and the rise of artificial intelligence spell planetary doom.

And in an interview with Larry King in June, Hawking described how an increase in air pollution, emissions of carbon dioxide and overpopulation are major threats to humanity.

“Six years ago I was warning about pollution and overcrowding, they have gotten worse since then,” Hawking said. “The population has grown by half a billion since our last meeting with no end in sight. At this rate, it will be 11 billion by 2100. Air pollution has increased by 8 percent over the past five years.”

“I can’t,” Hawking replied. “He is a demagogue, who seems to appeal to the lowest common denominator.”

However, he added that “a more immediate danger is runaway climate change.”

“A rise in ocean temperature would melt the ice-caps and cause a release of large amounts of carbon dioxide from the ocean floor,” he continued. “Both effects could make our climate like that of Venus, with a temperature of 250 degrees.”

In September, Hawking was one of 375 members of the National Academy of Sciences that signed an open letter that warned that America’s withdrawal from the Paris agreement would hurt the nation’s international credibility and undermine the climate pact.