Leonardo DiCaprio, Before The Flood

Posted by: WhosGreenOnline November 3, 2017 in Climate/Environment, Environment, Nature Comments Off on Leonardo DiCaprio, Before The Flood 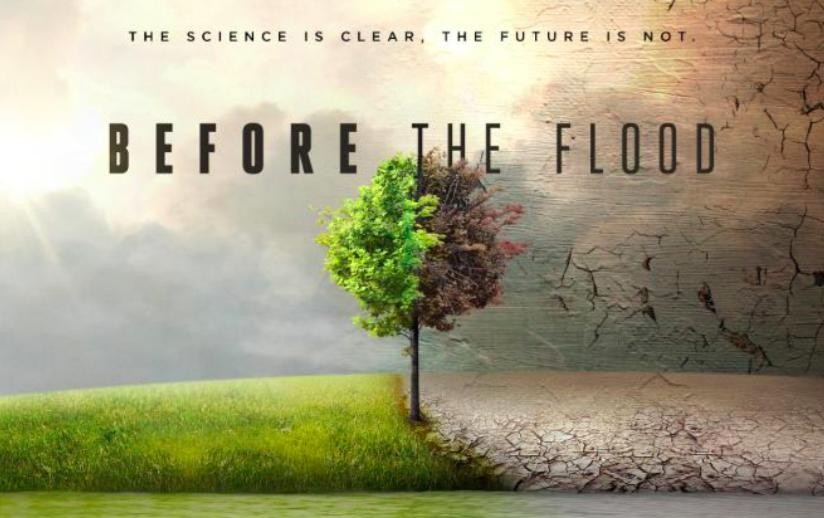 I posted an article a couple days back, promoting the documentary, “Before The Flood” (Full Movie) featuring Leonardo DiCaprio. At the time of posting the article, I had not yet watched the documentary! I viewed the film last night, and I feel compelled to share my thoughts and views!

I have always liked Leonardo DiCaprio, I think he is a very gifted and talented young actor, after watching the documentary in full, it turns out, he is also an impressive humanitarian as well. I think he is a bright, intelligent, concerned and very well spoken young man. Considering he is an actor, his role in the film could very well be an act, regardless, he convinced me and also convinced; The UN secretary general Ban ki Moon. Aside from receiving an Academy Award and Golden Globe Award for Best Actor, the Hollywood actor, has been appointed as a United Nations representative on climate change.

Following the success of Titanic in 1997 along with earlier films, 24-year-old DiCaprio established the Leonardo DiCaprio Foundation in 1998, a non-profit organization devoted to promoting environmental awareness. Although concerned with all areas of the environment, it focuses on global warming, preserving Earth’s biodiversity and supporting renewable energy. It has worked on projects in over 40 countries and has produced two short web documentaries, Water Planet and Global Warning.

Because of his active involvement in those causes, he has received praise from environmental groups. Among the accolades received were the Martin Litton Environment Award, in 2001, from Environment Now, and the Environmental Leadership Award in 2003 from Global Green USA.

DiCaprio chaired the national Earth Day celebration in 2000, where he interviewed President Bill Clinton and they discussed plans to deal with global warming and the environment. In 2007 he had a major role in The 11th Hour, a documentary about people’s relationship to nature and global warming. He co-produced, co-wrote and narrated the film. From a benefit “11th Hour” fine art auction he organized in 2013, he raised nearly $40 million to toward his foundation. He told attendees, “Bid as if the fate of the planet depended on us.” It became the world’s highest-grossing environmental charity event ever held. DiCaprio states that global warming is the world’s “number-one environmental challenge”. In July 2016 his foundation awarded $15.6 million to help protect wildlife and the rights of Native Americans, along with combating climate change.

He has been an active supporter of numerous environmental organizations and has sat on the board of the World Wildlife Fund, Global Green USA, International Fund for Animal Welfare and the Natural Resources Defense Council. He traveled to Indonesia in early 2016 where he criticized the government’s palm oil industry’s slash-and-burn forest clearing methods.

He drives environment-friendly vehicles, including an electric Tesla Roadster, a Fisker Karma plug-in hybrid, and a Toyota Prius. His home is powered by solar panels. At the 2007 Oscar ceremony, DiCaprio and former Vice President Al Gore appeared to announce that the Academy Awards had incorporated environmentally intelligent practices in its production. He presented at the 2007 American leg of Live Earth, and in 2010 his environmental work earned DiCaprio a nomination for the VH1 Do Something Award, honoring people who do good. In 2014 he was appointed as a United Nations representative on climate change, and later that year he made an opening statement to members of the UN Climate Summit. He again spoke at the UN in April 2016 prior to the signing of Paris Climate Change Agreement.

In 2015, DiCaprio executive produced a new Netflix-exclusive cut of Cowspiracy. The film explored the impact of animal agriculture on the environment and the positions of several environmental organizations on the issue.

At the 2016 Oscar ceremony, DiCaprio won the award for Best Actor. He used his acceptance speech to express his appreciation and worry for the environment when he said:

Climate change is real, it is happening right now. It is the most urgent threat facing our entire species, and we need to work collectively together and stop procrastinating. We need to support leaders around the world who do not speak for the big polluters, but who speak for all of humanity, for the indigenous people of the world, for the billions and billions of underprivileged people out there who would be most affected by this. For our children’s children, and for those people out there whose voices have been drowned out by the politics of greed.

I am not a scientist, however after watching the documentary, i’m amazed at the overall message I received is almost exactly what I had already known before watching the film……………it’s hard for me to understand how there are people who still deny and refuse to believe that climate change is for real, and still believe it is a Hoax and is non existent today! I believe we are experiencing the very 1st phase of mankind’s extinction………Considering mankind’s greed, perhaps it is inevitable!

Previous: Climate Change: Being Eco-Friendly On A Budget
Next: Trump Changes His Mind On Global Warmng
© Copyright 2010-2022, All Rights Reserved...Created, Designed, and Managed by: Michael R. Craig, owner/founder