Posted by: WhosGreenOnline November 4, 2016 in Climate/Environment Comments Off on Extinction, Earth In Severe Crisis in 65 Mil. Yr. 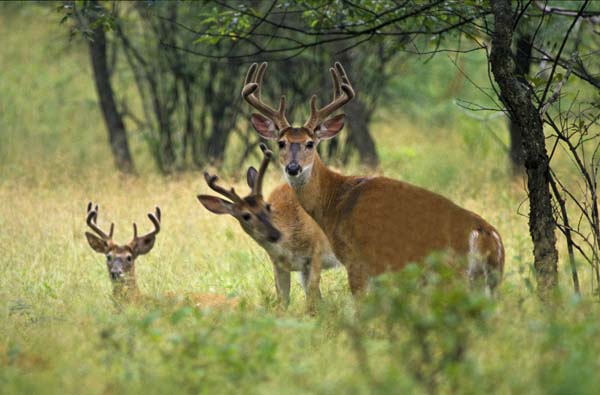 Earth’s living community is now suffering the most severe biodiversity crisis in 65 million years, since a meteorite struck near modern Chicxulub, Mexico, injecting dust and sulfuric acid into the atmosphere and devastating 76 percent of all living species, including the dinosaurs.

Ecologists now ask whether or not Earth has entered another “major” extinction event, if extinctions are as important as general diversity collapse and which emergency actions we might take to reverse the disturbing trends.

In 1972, at the first UN environmental conference in Stockholm, Stanford biologist Paul Ehrlich, linked the collapse of “organic diversity” to human population and industrial growth. In 1981, he published Extinction, explaining the causes and consequences of the biodiversity crisis and providing response priorities, starting with stabilizing human population and growth.

This summer, Ehrlich, Gerardo Ceballos (University of Mexico) and their colleagues, published “Accelerated modern human–induced species losses” in Science Advances. “The study shows,” Ehrlich explains, “that we are now entering the sixth great mass extinction event.” To demonstrate that Earth is experiencing a “mass extinction event” depends on showing that current extinction rates far exceed normal “background” extinction rates. To be absolutely certain, Ehrlich and Ceballos used the most conservative estimates of current extinctions, which they found to be about 10-to-100-times faster than the background rate.

There are three points worth keeping in mind:

Biodiversity decline is now higher than any time since the Chicxulub asteroid impact. This time, however, humans are the asteroid.

I’ve used the term “ninth extinction” because the so-called “five major extinctions” occurred in the last 450 million years, but three earlier extinctions are significant and teach us something important about ecology and our potential role in emergency response.

Oxygen is toxic to anaerobic bacteria. Some species perished at only 0.5 percent oxygen, while others survived up to 8 percent oxygen. Oxygen eventually saturated the oceans, leaked into the atmosphere and oxidized methane, triggering a global cooling, the “Huronian glaciation,” which led to more extinctions.

The evolutionary success of photosynthetic bacteria and algae triggered impacts similar to our own: crowded habitats, toxic waste, atmospheric disruption, temperature change and biodiversity collapse. Sound familiar? The die-off continued until certain organisms evolved to metabolize oxygen and the ecosystem regained a new dynamic equilibrium. We could help our situation by encouraging organisms that metabolize carbon dioxide, namely plants, but we are reducing forest cover, adding to the crisis.

In Newfoundland, Canada, in 1868, Scottish geologist Alexander Murray, found unusual disc-shaped organisms, Aspidella terranovica, in rock formations that pre-dated known animal forms, so most paleontologists doubted they represented a new fauna. However, in 1933, more specimens appeared in Namibia and in 1946, jellyfish fossils from this era appeared in the Ediacara Hills of Australia. These organisms, now known as the “Ediacaran” fauna, had no shells or skeletons, so they left only rare fossil impressions.

Oxygen metabolism allowed organisms to use nitrogen and to transform more energy, allowing complex morphologies, cell nuclei and symbiotic relationships within cells and among organisms. For another billion years, cells diversified, learned how to replicate by dividing (mitosis), then by sex (meiosis) and how to cooperate to form multi-cellular plants and animals. By 650 million years ago, Ediacaran life had diversified into unipolar, bipolar and radial organisms, including worms, sponges and jellies.

This abundance collapsed about 542 million years ago, possibly associated with meteorite impacts and an oxygen drop. More than 50 percent of the species probably perished. Typically, however, this extinction opened ecological niches for the explosion of life forms that followed.

Organisms that survived the Ediacaran collapse diversified during the so-called “Cambrian explosion.” Life had already evolved for three billion years, before the appearance of crustaceans, arthropods (insects), Echinoderms (starfish, urchins), molluscs and our own ancestors, the chordates. Earth had been warming, but burgeoning marine plant life captured carbon-dioxide from the atmosphere, causing a cold period and around 488 million years ago, some 40 percent of the Cambrian species disappeared.

Typically, we measure extinction events by the numbers of species or families that disappear, but in this case, some phyla—fundamental life forms—perished. The extent of Cambrian phyla diversity remains controversial among biologists. In 1989, Harvard paleontologist Stephen Jay Gould published A Wonderful Life, in which he proposed numerous extinct Cambrian Phyla.

Some unusual Cambrian creatures may be earlier stages of existing forms, but some phyla likely perished at the end of the Cambrian. These early animals remain difficult to classify, so modern taxonomy incorporates “stem groups” of partially formed phyla. Cambrian oddities such as Odontogriphus and Nectocaris—may be stem groups related to molluscs. Or maybe not. Nectocaris possesses an arthropod-type head on a body with fins, similar to the chordates. Aysheaia, a lobopod with walking appendages, may represent a stem group related to later arthropods. The stunning Cambrian Pikaia—with a rudimentary backbone, no clear gills, unique muscle styles and tentacles—could be an extinct phyla. Vetulicolia—a worm-like animal with insect features, vertebrate, no eyes and no legs or feelers—probably represents an extinct phyla.

Losing phyla may be a unique quality of this Cambrian extinction event. After three billion years and three major extinctions, life’s fundamental forms settled into the roughly 90 phyla that endure to this day: 35 animal forms (many rare; Placozoa, for example consists of a single known species), 12 plant forms, 14 fungi and 29 bacteria, plus the more obscure microorganisms archaea and protista. Most of the species we discuss and protect—birds, fish, reptiles, mammals—arise from a single phyla, the chordates and occasionally insects, molluscs, worms and corals. 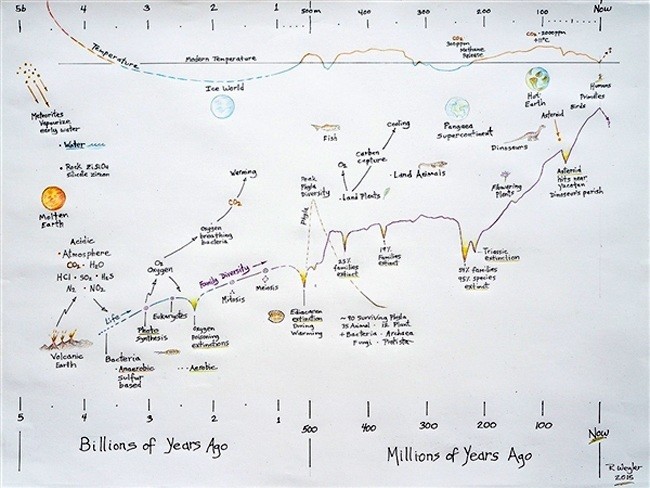 Life’s history on Earth, showing the rise of Family diversity, with the 8 major extinction events prior to the current biodiversity collapse caused by human activity. (Expanded scale for the last 500-million years)

After the Cambrian collapse, species diversity did not significantly increase for 300 million years, as life filled the marine habitats and moved onto land. Dozens of serious diversity collapses occurred during this time. The “Lau Event,” 420 million years ago (mya), caused by climate change, erased about 30 percent of the species. During the Carboniferous period, 305 mya, a booming rainforest captured carbon and set off a global cooling that triggered widespread extinctions.

The approximately 90 essential life forms, however, endured through these disruptions and through the modern “5 major extinctions:”

Cretaceous: Demise of the dinosaurs, 65 mya, 76 percent species loss, caused by the meteorite that struck near Chicxulub, Mexico.

The three ancient extinctions and five modern extinctions, bring us to the current diversity collapse, primarily caused by human expansion on Earth.

Massive biodiversity reductions, even among animals that do not go extinct, destabilize an ecosystem. “There are examples of species all over the world,” Paul Ehrlich explains, “that are essentially the walking dead.” Certain plant and animal populations may become so small that they may not recover, or may lose symbiotic function in the ecosystem. Depleted pollinators or prey species can create cascading extinctions. According to World Wildlife Fund and the Zoological Society of London, Earth has lost half its wild animals in 40 years, through habitat loss, hunting, poaching, climate change, toxins and invasive species.

At Seahorse Key, formerly the largest bird colony on the Gulf Coast of Florida, thousands of herons, spoonbills, egrets and pelicans have abandoned the rookery, possibly in response to low-flying drug-enforcement aircraft. Bird species are declining in most habitats and more than 12 percent are threatened with extinction.

Amphibians suffer the highest extinction and depletion rates (McCallum, 2007). More than a quarter of all reptiles are at risk and 37 percent of freshwater fish (IUCN). More than 100 mammals have gone extinct in the era of European expansion and today, 22 of the 30 surviving large mammal carnivores are listed as “endangered” by the World Conservation Union, including African wild dogs, Black rhinos and the few surviving Mountain gorillas. 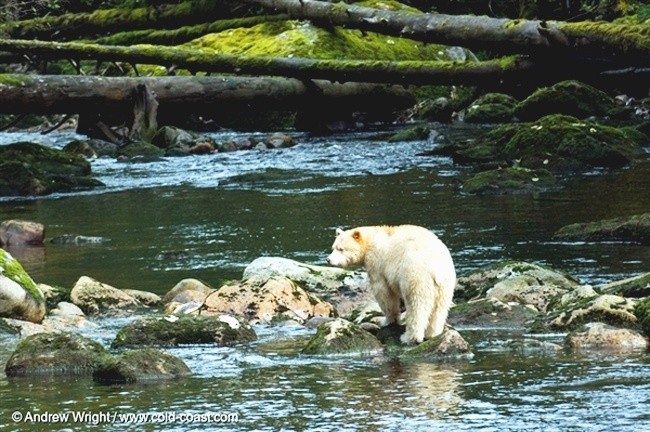 About 1.7 million species have been classified by taxonomists and about 15,000 are added to this list each year. Biologists estimate that there may be 30-40 million species, plus perhaps billions of microbe species.

The conservative Ehrlich/Ceballos study confirmed that the extinction rate was up to 100-times the background rate, but most studies estimate much higher: A Brown University study in 2014 estimates that current extinctions are 1000-times faster than background. A study from S.L. Pimm and colleagues in Science journal estimates 1000-times higher. A study by Pimm and Jurriaan de Vos, published in Conservation Biology suggests current extinction rates are 1,000 times higher than background and heading toward 10,000 times higher.

Thus, by any reasonable measure Earth is undergoing a major biodiversity collapse, almost entirely caused by human activity. “If it is allowed to continue,” Gerardo Ceballos warns, “life would take many millions of years to recover and our species itself would likely disappear early on.”

Ehrlich, identified the fundamental cause more than forty years ago: Human sprawl. Ehrlich and colleagues calculated in 1986 that humanity was using about 40 percent of Earth’s Net Primary Productivity. Today, with 7.1 billion humans, we are using more than half of Earth’s productivity and the other 30-million species survive on the left-over habitats. If human population reaches 11 billion, we will likely require about 80 percent, although such a scenario may not be biophysically possible. 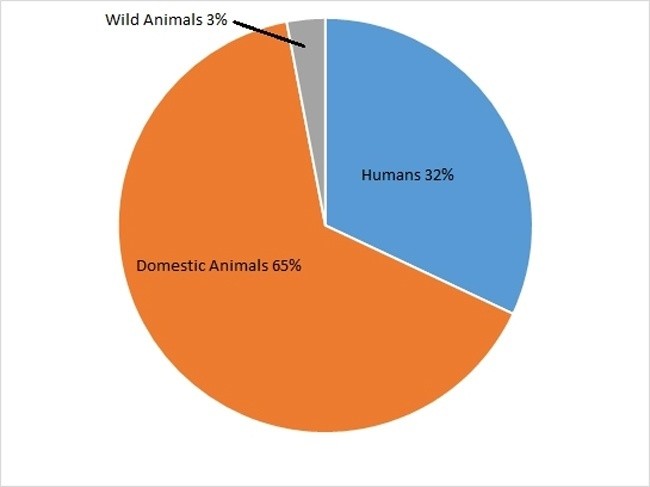 The history of life on Earth teaches us that successful life forms—bacteria, forests, or tool-wielding primates—typically grow beyond the capacity of their habitats, change those habitats and set the stage for their own decline. Are we smarter than the bacteria? Will humanity find ways to slow down, limit our own growth and preserve wild nature? Our track record is not promising. Our desires, economic and religious doctrines and polluting technologies all work against the necessary changes. We need a large-scale ecological renaissance in human affairs, a shift in awareness that will allow human enterprise to accept limits on its own expansion.

Previous: Egloo, candles will never be the same!
Next: Human Predators, Worst on the Planet
Search WhosGreenOnline.com below: