Posted by: WhosGreenOnline April 4, 2017 in Energy Comments Off on Renewable Energy Will Soon Surpass Coal and Nuclear Power 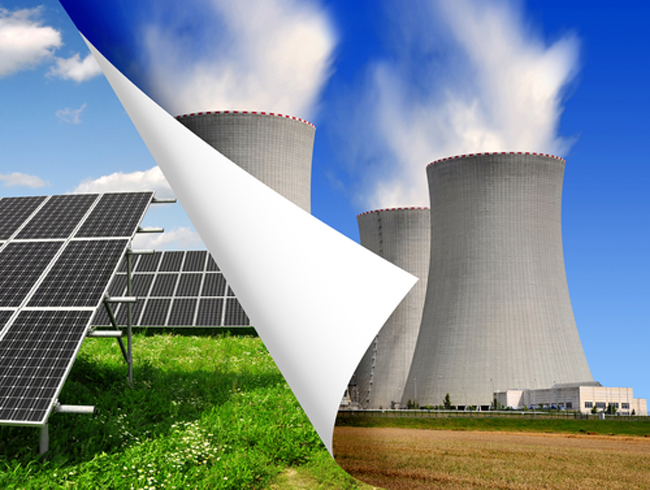 As a certified energy geek, I always look forward to this time of year. On July 11 and July 12, the Energy Information Administration (EIA) holds their annual conference to discuss current energy technology, market and policy issues and presents results from their new Annual Energy Outlook (AEO) 2016 report.

One of the headlines this year is EIA’s new projections for renewable energy, which under their reference case is expected to surpass nuclear power by 2020 and coal by 2028 to become the second largest source of U.S. electricity generation after natural gas (see Figure 1 below).

Here are seven key takeaways from the AEO 2016 that explain why EIA is projecting such a large increase in renewable energy this year:

EIA’s reference case includes the recent five-year extension of the federal production and investment tax credits for wind and solar passed by Congress in December 2015 and implementation of EPA’s Clean Power Plan (CPP). While the U.S. Supreme Court put a temporary hold on the rule in February 2016 until the merits of the case are decided, EIA decided to include the CPP in the reference case because the rule has not been overturned.

The federal tax credits, state renewable electricity standards (RESs) and continued cost reductions for wind and solar will drive significant growth in renewables though 2021 (Figure 1). During this time, EIA actually projects natural gas generation to decline slightly as wind and solar are more cost-effective with the tax credits.

After the CPP targets kick in 2022, EIA projects both renewables and natural gas to grow as the two most cost-effective ways (along with a modest increase in energy efficiency) for states to replace coal and comply with the CPP. These results are consistent with recent analyses by the Union of Concerned Scientists (UCS), NREL and the Rhodium Group.

The renewable energy (including wind, solar, geothermal, biomass and hydropower) share of U.S. electricity generation grows from 13 percent in 2015 to 24 percent in 2030 and 27 percent in 2040, with almost all of the growth from wind and solar PV (Figure 2).

This is because continued cost reductions are projected for these technologies beyond the 60-70 percent cost reductions already achieved since 2009. Under EIA’s reference case with the federal tax credits and CPP, U.S. wind capacity nearly doubles by 2022, reaching 144 gigawatts, while U.S. solar capacity grows five-fold by 2030, reaching 125 gigawatts. Geothermal increases a significant amount in California and the Southwest, but provides a relatively small share of U.S. electricity generation.

EIA also projects virtually no growth in hydro or biopower. Despite EIA’s inaccurate assumption that all biomass feedstocks are carbon neutral, biopower is still not economically competitive with wind, solar and natural gas. The lack of growth in hydro and biomass is consistent with recent analyses by UCS, NREL and Rhodium Group that include the federal tax credit extension and CPP.

3. Renewable Generation Increases in all Regions of the Country by 2030

The biggest increases occur in the West and Plains, which have abundant, low cost wind, solar and geothermal (Figure 3). The Southeast also sees a big increase in solar as costs continue to fall. The Northeast and Mid-Atlantic see a smaller increase in renewables and a bigger increase in natural gas.

The Southeast also sees a modest increase in nuclear generation due to five new reactors currently under construction or operating in Georgia, South Carolina and Tennessee. This growth offsets a modest reduction in nuclear generation in Mid-Atlantic and Northeast states where EIA assumes a small number of existing plants will retire before their current operating licenses expire. (Note that the retirement of Diablo Canyon in California is not included as the announcement was made after EIA completed its modeling). The Midwest/Mid-Atlantic states also see the greatest reduction in coal generation and the largest increase in natural gas.

EIA projects renewable generation to increase the most if states chose rate-based rather than mass-based targets as part of their CPP compliance strategies. Broader regional trading with mass-based targets also results in more renewables, less natural gas and less reduction in coal than the more limited trading assumed in the reference case.

Not surprisingly, in their “extended case” EIA found that continuing to increase the CPP emission reduction targets through 2040 (the current program only goes through 2030) would result in more renewables and natural gas and less coal than the reference case.

EIA projects that average retail electricity rates would be 3 percent higher between 2025-2030 in the reference case (with the CPP) than in the no CPP case. However, total U.S. electricity expenditures would only be 1.3 percent higher in the CPP case over the same period because EIA assumes a modest increase in energy efficiency investments to comply the CPP.

A recent analysis by UCS found that energy efficiency could make a much larger contribution to state compliance with the CPP that would result in cumulative net savings to consumers of $30.5 billion between 2016 and 2030.

While EIA’s natural gas price projection is lower in AEO 2016 than it was in AEO 2015 (Figure 5), large amounts of wind and solar are still competitive due to continued cost reductions and the federal tax credit extension.

UCS has been an outspoken critic of EIA’s pessimistic renewable energy projections and assumptions for many years. We have written several blog posts on the topic and provided input directly to EIA on a few of their analyses and as a participant on several EIA modeling working groups. We also use a modified version of EIA’s National Energy Modeling System (NEMS) in-house to show how renewables could make a larger contribution to the U.S. electricity mix at a much lower cost when using more realistic assumptions.

One of the main reasons why EIA’s projections have fallen short is because they have consistently overestimated the cost of renewable energy technologies like wind and solar. They often lag a few years behind what’s happening on the ground. However, this year is different. For AEO 2016, EIA finally lowered their costs for wind and solar to be more in-line with cost data from a large sample of recent projects, as documented by DOE’s national labs and the national wind and solar trade associations.

In EIA’s defense, their reference case for each AEO only reflects state and federal energy policies that were enacted at the time they do their projections, as discussed extensively in a recent EIA report. With Congress allowing federal renewable energy tax credits to lapse several times before extending them for relatively short periods, and states adopting and increasing renewable electricity standards (RES) many times over the past two decades years, it is somewhat understandable that EIA’s projections of renewable energy development have fallen short of reality.

While future EIA conferences and AEOs may highlight different topics, I’ll remember 2016 as the year EIA turned the corner to show a bright future for renewables.

Previous: Salt Lake City Commits to 100% Renewable by 2032
Next: Household Appliances, Greener Ways to Use
Search WhosGreenOnline.com below: