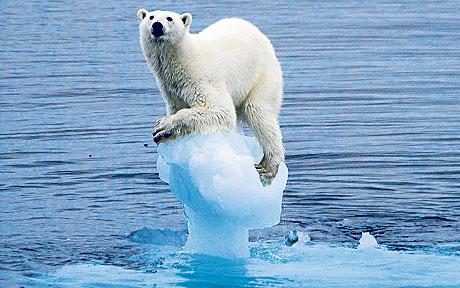 The polar bear in Svalbard, a remote group of islands in the Arctic, are not doing well, according to photographer Kerstin Langenberger.

I see the summers being so pleasant (and warm) as never before. I see the glaciers calving, retreating dozens to hundreds of metres every year. I see the pack ice disappearing in record speed. Yes, I have seen bears in good shape—but I have also seen dead and starving polar bears. Bears walking on the shores, looking for food, bears trying to hunt reindeer, eating bird’s eggs, moss and seaweed. And I realized that the fat bears are nearly exclusively males which stay on the pack ice all year long. The females, on the other hand, which den on land to give birth to their young, are often slim. With the pack ice retreating further and further north every year, they tend to be stuck on land where there’s not much food. In the first year, they lose their first cub. In the second year, they lose their second (and last) cub. Only once I have seen a mother with a nearly independent cub. Only few times I have seen beautifully fat mothers with beautifully fat young. Many times I have seen horribly thin bears, and those were exclusively females—like this one here. A mere skeleton, hurt on her front leg, possibly by a desperate attempt to hunt a walrus while she was stuck on land.

Experts claim the Svalbard population is stable, even rising. Well, here comes my question: how can a population be stable if it consists of less and less females and cubs? How can a population be doing good if most bear will score a body index of two to three out of five? Only once I have seen a bear getting a big fat five, but several times I have seen dead bears and bears like this one: a mere one on the scale, doomed to death.

And while some, such as Iain Stirling from the University of Alberta, have cautioned against using this one photo as proof that all polar bears are starving in a warmer world, Langenberger is not the only one to sound the alarm.

“You have to be a little bit careful about drawing conclusions immediately,” Stirling told Mashable. “[The bear] may be starving, but it may just be old. A difficulty hunting could be involved.” Stirling noted that the bear appears to have an injury to one of its hind legs, which could have played a role in its weight loss. “I don’t think you can tie that one to starvation because of lack of sea ice.”

Still, others such as National Geographic photographer Paul Nicklen, who has been to the Arctic on multiple occasions, was struck in a recent visit by the rapidly dwindling sea ice and the number of dead polar bears—something he had never seen before.

Last summer I traveled with a group of friends to Svalbard, Norway in search of the bears. We went to my favorite spot where I have always been able to find bears roaming around on sea ice throughout the summer. On this occasion, however, we didn’t find any sea ice and we never found any bears alive. We did find two dead bears in this location and other groups found more dead bears. These bears were so skinny, they appeared to have died of starvation, as in the absence of sea ice, they were not able to hunt seals. In all of my years of growing up in the Arctic and later, working as a biologist, I had never found a dead polar. It is now becoming much more common. Through @sea_legacy and @natgeo we will continue to shine a light on our changing planet to convince the unconvinced. Please follow me on @paulnicklen to learn more about the effects of climate change. #polarbear #nature #wildlife #arctic #seaice @thephotosociety

And all of this anecdotal evidence is supported by scientific data. The International Union for Conservation of Nature and Natural Resources (IUCN) currently lists polar bears as “vulnerable”—one step above “endangered”—because it’s believed that their numbers have been reduced by more than 30 percent in the last 45 years.

“Global climate change posses a substantial threat to the habitat of polar bears,” says the IUCN. “Recent modeling of the trends for sea ice extent, thickness and timing of coverage predicts dramatic reductions in sea ice coverage over the next 50-100 years.”

There’s an ongoing campaign to save the bears by the Center for Biological Diversity, Natural Resources Defense Council, Greenpeace, Earthjustice and other groups.