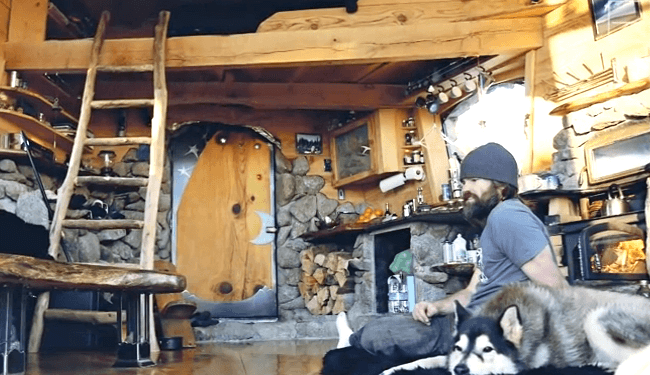 Mike Basich once lived in a luxurious 4,000 square foot mansion, but right now, the former professional snowboarder is living out his childhood dreams in a tiny cabin in the snow-covered Sierra Nevada mountains.

But really, his 250-square-foot, off-grid home in Soda Springs, California is a dream come true for anyone who appreciates living off of the land.

Featured recently on the YouTube series Seeker Stories, Basich’s home is a labor of love constructed over a five-year stretch. It’s a fortress made with 175 tons of mountain rock that he and some friends moved with their own hands.

Nicknamed Area-241, the house gets powered by the sun, heat from a single fireplace and has a wood-fired hot tub with water supplied from a nearby waterfall. The pad sits on at 40-acre piece of land and has everything one possibly needs and even a personal chairlift.

There’s one exception … for whatever reason, Basich hasn’t installed an indoor toilet, though he said in an interview about simple living: “It’s always going to be hard—that’s the best part about it all in some ways. To focus on what you are willing to give up if needed to make it happen, like using an outdoor toilet versus something you’re use to, etc.”).

At one point in his snowboarding career, Basich told Seeker Stories he was pulling $170,000 a year and bought a giant home and a fancy car. When asked by host Lisa Ling why he decided to leave all that for something much simpler, he explained: “It didn’t do anything different for me. It just took up time.”

Now that he no longer in the professional circuit, he’s found a second calling as a snowboarding photographer and does a lot of work with extreme-action video camera makers GoPro, of course.

“Nature inspires me, and that’s why I choose this kind of environment,” he said. “I want to learn how to live off the grid, have appreciation for nature, and how to keep the rain off my head and stay warm.”

“I like to think of it as getting back to the basics of humanity,” he added. “I like feeling connected to the Earth more than I could with a 4,000 square foot house.”

In the video, Basich takes the viewer on a tour of his cabin and explains how its design inspiration came from the golden ratio law of nature.